5-substituted uracils (YX-U) can be accepted by thymidine kinase and DNA polymerase which enables their incorporation into DNA by the cellular enzymatic machinery of DNA biosynthesis. If a given substituent is electrophilic and the chemical bond, that holds the uracil and YX together, sufficiently weak, an excess electron attachment leads to a rapid formation of the uracil radical. The latter species triggers then a serious DNA damage as strand breaks or interstrand  and intrastrand crosslinks. 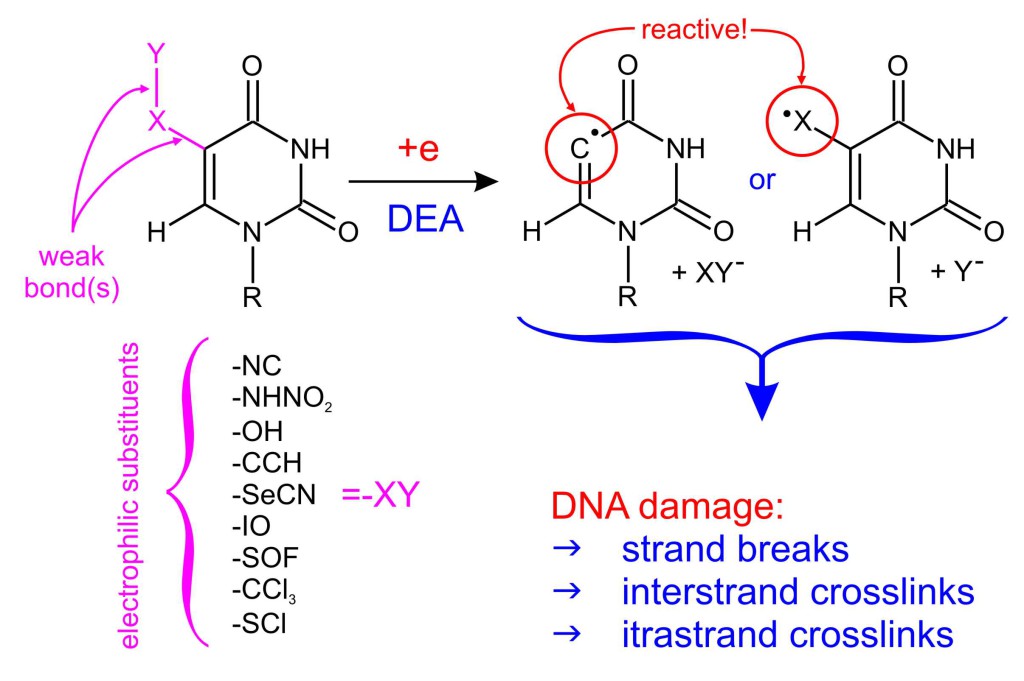 In the current study a search employing the mentioned above premises and Hammet substituent constants, characterizing the electrophilic properties of substituents, is performed. DFT calculations will enable free energy profiles for the dissociative electron attachment (DEA) to modified nucleobases to be obtained. Based on these results, promising derivatives will be selected for the subsequent QM/MM studies on their enzymatic phosphorylation and propensity to be involved in DNA elongation.

5-bromouracil (BrU) is a well-known radiosensitizer that leads to 2-3 fold increase of cellular sensitivity to ionizing radiation in vitro. The commonly accepted mechanism of BrU sensitization is based on electron-induced dissociation of the bromoderivative that leaves behind the reactive uracil radical in DNA. If this assumption is correct, the local sequence (the bases in close vicinity to BrU) that has crucial impact on the BrU electron affinity, should govern the damage. 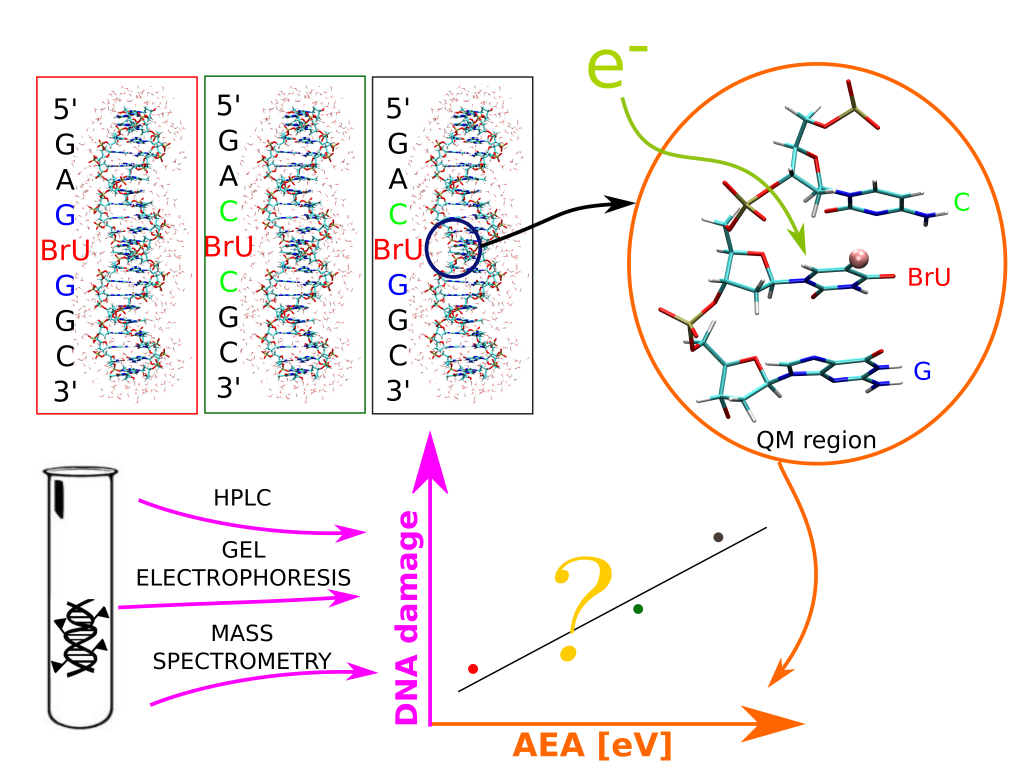 The present project constitutes a combination of computational and experimental studies that focus on the influence of local sequence on electron-induced DNA damage. We designed several duplexes labeled with BrU and differing only with the 5’-XBrUY fragment (where X and Y stand for DNA bases). The electronic affinity of duplexes in an aqueous solution will be calculated using a QM/MM model while the yield of single strand breaks will be determined with PAGE, DHPLC and high-resolution mass spectrometry. A significant correlation between the measured number of strand breaks and the calculated AEA will be a solid prove for the assumed damage mechanism. 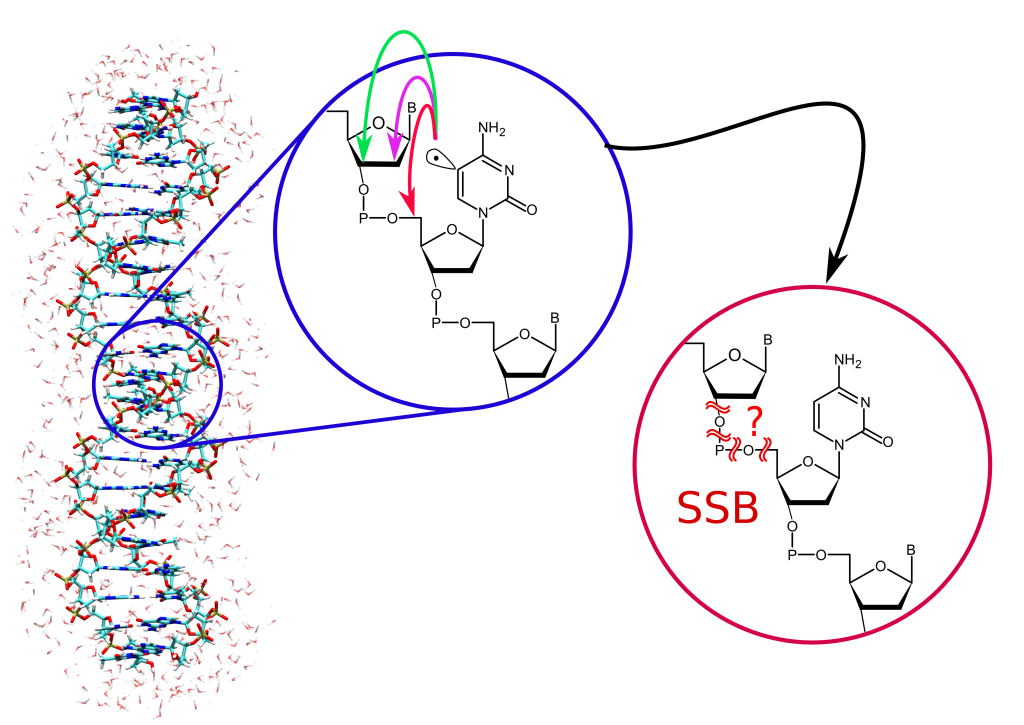 Pyrimidine base radicals, if formed in DNA, may lead to a deep damage of the biopolymer. However, although the ionizing radiation induced single strand breaks (SSB) in BrU labeled DNA have been observed since early sixties the detailed mechanism of their formation is still unclear. The current study constitutes first, quite a detailed QM/MM model which follows the fate of pyrimidine radical in double-stranded DNA. Two variations of QM/MM methodology – subtractive (ONIOM/Gaussian) and additive (metadynamics/cp2k), is employed to describe the process starting from the pyrimidine radical and ending with a strand break. 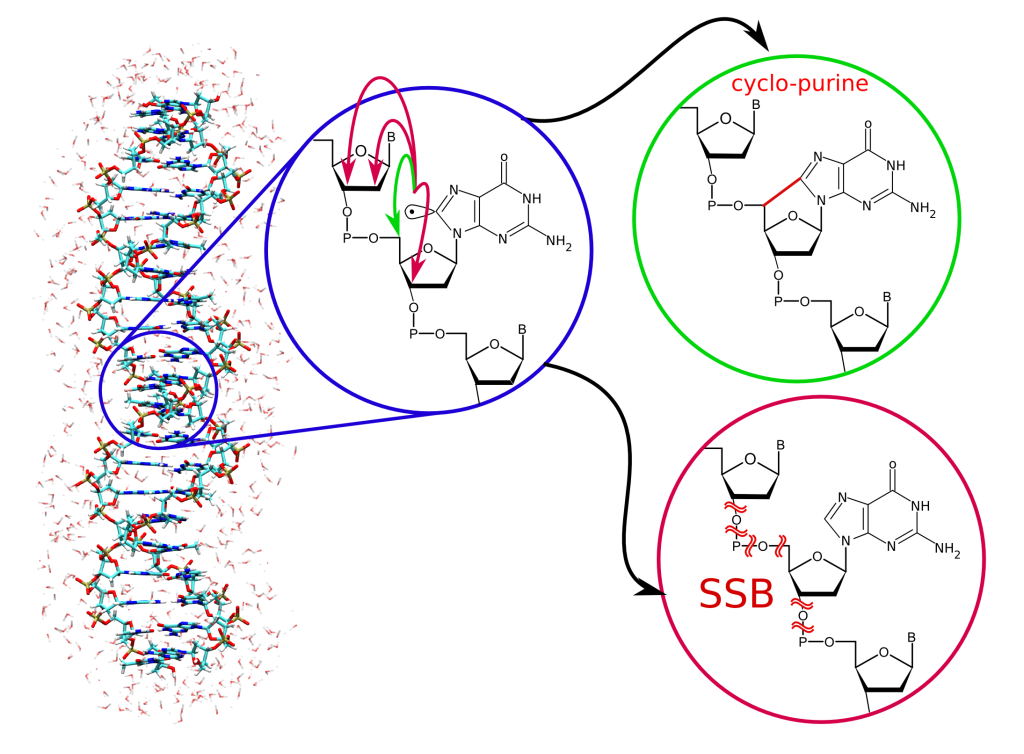 Unlike pyrimidine nucleoside radicals, the purine ones (Pur•) may be involved in hydrogen transfer from their own sugar residue. This leads to quite a different behavior as compared to the pyrimidine radical chemistry. Indeed, the Pur• triggered single strand breaks are produced via a homolytic rather than heterolytic dissociation of the phosphate bond. Moreover, only Purs• give rise to the formation of cyclopurine lesions. These chemical reactions will be simulated with metadynamics as well as the subtractive QM/MM methodology.